No spiders were harmed in the making of this experiment

No spiders were harmed in the making of this experiment 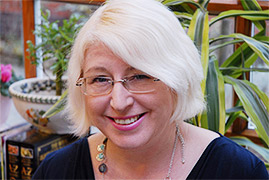 We may be getting closer to a scientific explanation for how EMDR achieves the results that we see as therapists. Jessica Wooliscroft summarises Professor Christoph Mueller-Pfeiffer’s presentation of his recent experiments.

Professor Mueller-Pfeiffer shared that his team felt proud and excited that their study had been published in the Journal of Psychophysiology; but then added that he himself felt somewhat challenged to make the experiment intelligible to his audience, as he was aware that some might struggle or start to switch off. He need not have worried – for this study involved experiments in which students, who were already scared of spiders, were made even more scared of spiders prior to being exposed to spider movies to see what would happen. Of course, this would hold my attention. (Although I could not help but be reminded of the opening scene of the movie Ghostbusters in which Bill Murray, parapsychologist, researches telepathy by giving students electric shocks if they fail to guess which card is being held up).

Returning to the serious intent behind this research, Mueller-Pfeiffer reminded us that there is now plenty of evidence to show that EMDR is an effective treatment for PTSD. The question that puzzles researchers is how does it work? Theories range from prolonged exposure causing extinction; the restructuring of cognitions; the relaxing effect of mindfulness and a new theory from animal research which suggests that trauma memories are memories that are ‘over consolidated’. So EMDR works because it interferes with the reconsolidation of unprocessed trauma. A helpful example was given as follows.

Let’s imagine that you experience a car crash near exit 16 on the motorway. This is a learning stimulus. The experience is stored in short term memory (STM) for a few hours. It is then consolidated and moved into long term memory (LTM). Weeks later, as you pass the scene of the accident near exit 16, that memory resurfaces. Your LTM is recalled and the memory trace moves from a static to an active state. It then gets updated and reconsolidated back into long term memory. It is this reconsolidation, or repeated updating, that creates the traumatic memories of PTSD. If an animal is given a drug that interferes with reconsolidation by inhibiting it, there is found to be a modification of the memory.

Mueller-Pfeiffer reminded us that following prolonged exposure, trauma symptoms reduce and memories fade but, years later, an old trauma can be revived by a triggering event. Why? Because the original fear trace was only ever suppressed, not fully processed (i.e. erased), so it can always blow up again (Takashima 2012). However, if the reconsolidation of the memory trace can be inhibited, and the traumatic memory is processed, the traumatic version is gone forever. This has been shown to work in animal studies, so for three years Mueller-Pfeiffer’s team tried to replicate the findings in healthy humans. Why not use people suffering with PTSD? Apparently, such experimental subjects often drop out of research studies making it extremely hard work to run these studies. So, it was decided to use healthy university students instead who would, Mueller-Pfeiffer acknowledged, “for fifty bucks be happy to sign up”.

The team used classical conditioning on day one to instil a fear response. A healthy human, i.e. a university student, is brought to the lab and asked to look at some symbols on a screen. Every time they see a red triangle, they get a shock.

This is where Mueller-Pfeiffer reassured his audience that “It is not painful, but it is really annoying”. Thereafter, in the professor’s words “they get nervous when they see the red triangle that was previously paired with the shock”. In fact, when they are shown the red triangle on day two, the students show a fear response. This fear response is measured using skin conductance or, as the professor puts it: “They are sweating a little bit more”.

Mueller-Pfeiffer wanted to recreate this result in a situation that was a lot closer to treating a trauma memory. So instead of using red triangles, they decided to bring in the ‘spider movies’.

Snakes and spiders are ‘biologically prepared’ stimuli in that there is, in many humans, an instinctual fear response to their movements. But this was not enough for the team; they wanted to use University Students who were already afraid of spiders; that is, their spider anxiety was high, but not high enough to qualify as phobia. They also selected those students who had a strong conditioned fear response in their experiments. (I was starting to understand why the professor had talked about the high numbers of subjects that drop out of psychophysiology experiments.)

The team had experimented with showing virtual-reality spiders but soon discovered that movies of real spiders “were more scary”. Three types of spiders were shown, with only two types paired with a shock. Mueller-Pfeiffer reported that “this generated a pretty nice fear response”. On day two, some of the subjects were given propranolol or extinction training but this time the interference did NOT work. So, the team decided to use EMDR and eye movements instead.

The study overall was described by the professor as lasting for three years; it was also described as a “tough study”. Of 155 students enrolled, 112 had to be excluded and the final two groups numbered only 20 each. I could certainly empathise with the professor and his team trying to find enough students willing and able to participate to complete this experiment.

In this study, using EMDR as interference, the two groups were given either:

The study revealed that delaying the eye movements for 10 minutes was much more effective at reducing the fear response.

This supported the theory that eye movements block reconsolidation of the fear memory. In other words, the fear memory is allowed to fade away rather than being continually updated and kept active in a way that Francine Shapiro might describe as maladaptive.

Mueller- Pfeiffer’s next study is to see if combining EMDR with propranolol will optimise the treatment even further. This would be useful clinically for those patients whose PTSD is resistant to EMDR alone.

When is the right time?

Someone raised the question as to when would be the best time to treat people after a traumatic experience?  Mueller-Pfeiffer acknowledged the research evidence suggesting that, if someone is in an acute trauma response up to four weeks after an event, they should be offered treatment as soon as possible. This was supported by the Chair of the Symposium Antonio Onofri, who shared that his own study had shown that offering EMDR to medics in an ongoing traumatic setting such as the COVID-19 pandemic had a positive effect in reducing trauma…even though the trauma was chronic.

This experiment did leave me wondering whether the brain mechanisms involved explain why Mavranezouli’s (2020) study on the cost-effectiveness of PTSD treatments had shown counselling to be less effective than no treatment. If the counselling style allows for repeated revisiting of the memory, it would be activated and reconsolidated and thereby not allowed to fade. Whereas eye movements interrupt that process. It also made me think about returning to using eye movements in my own clinical practice. I had switched to using butterfly hugs or taps during lockdown and working online, but if eye movements are this effective, I started to resolve to tackle my wariness of technology and get to grips with the online eye-movement apps.

Although the experimental design did sound rather unpleasant, it was an important study revealing useful findings as to how EMDR works. I was left feeling much more confident that I could, if asked, explain this to a supervisee or client. Surely this is what conferences are for, to raise our game?

Jessica Woolliscroft is an EMDR Europe Accredited Consultant and Facilitator. She is Director of the Brightstone Clinic in Cheshire